USGS Imagery Topo Base Map Service from The National Map

USGS Imagery Topo is a tile cache base map of orthoimagery in The National Map and US Topo vector data visible to the 1:9,028 scale. Orthoimagery data are typically high resolution images that combine the visual attributes of an aerial photograph with the spatial accuracy and reliability of a planimetric map. USGS digital orthoimage resolution may vary from 6 inches to 1 meter. In the former resolution, every pixel in an orthoimage covers a six inch square of the earth's surface, while in the latter resolution, one meter square is represented by each pixel. Blue Marble: Next Generation source is displayed at small to medium scales. However, the majority of the imagery service source is from the National Agriculture Imagery Program (NAIP) for the conterminous United States. The data is 1-meter pixel resolution with "leaf-on". Collection of NAIP imagery is administered by the U.S. Department of Agriculture's Farm Service Agency (FSA). In areas where NAIP data is not available, other imagery may be acquired through partnerships by the USGS. The National Map program is working on acquisition of high resolution orthoimagery (HRO) for Alaska. Most of the new Alaska imagery data will not be available in this service due to license restrictions. The National Map viewer allows free downloads of public domain, 1-meter resolution orthoimagery in JPEG 2000 (jp2) format for the conterminous United States.

Harvested from USGS Cached Base Map Services from The National Map 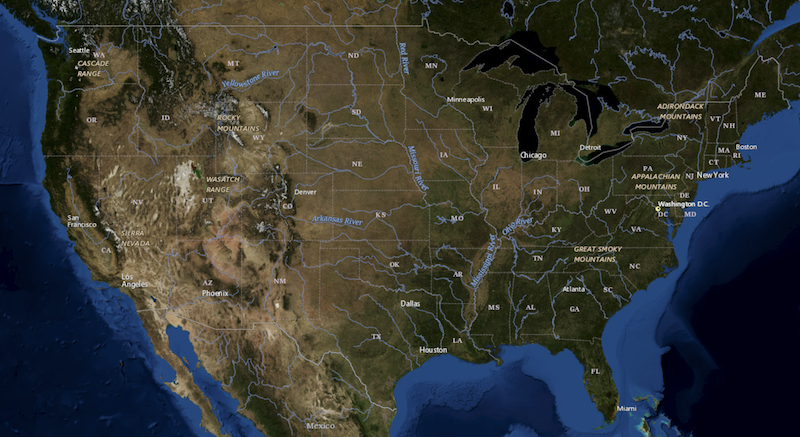