A solar flare is a short-lived sudden increase in the intensity of radiation emitted in the neighborhood of sunspots. For many years it was best monitored in the H-alpha wavelength and occurs in the chromosphere, though occasionally white light flares are seen in the photosphere. In modern times the solar X-ray wavelengths are monitored via satellite for solar flares. Flares are characterized by a rise time of the order of minutes and a decay time of the order of tens of minutes. The total energy expended in a typical flare is about 1030 ergs; the magnetic field is extraordinarily high reaching values of 100 to 10,000 gauss. Optical flares in H-alpha are usually accompanied by radio and X-ray bursts and occasionally by high-energy particle emissions. The optical brightness and size of the flare are indicated by a two-character code called "importance." The first character, a number from 1 to 4, indicates the apparent area. For areas of less than 1, an "S" is used to designate a subflare. The second character indicates relative brilliance: B for bright, N for normal and F for faint. A general discussion of solar flares is found in Svestka [1976]. The NOAA National Centers for Environmental Information (formerly NGDC) holds archives for about 80 stations, covering the period 1938 to the present. Currently 5 stations send their data to NGDC Boulder on a routine monthly basis -- the current main observing emphasis for Space Weather has transitioned to Coronal Mass Ejections (CMEs) which directly impact the Earth's geomagnetic field. Solar flares impact the Earth's upper atmosphere and can eject high energy particles that can cause satellite failures. The flare reports were processed and published in the monthly report "Solar-Geophysical Data" and in a different format in the IAU "Quarterly Bulletin on Solar Activity." 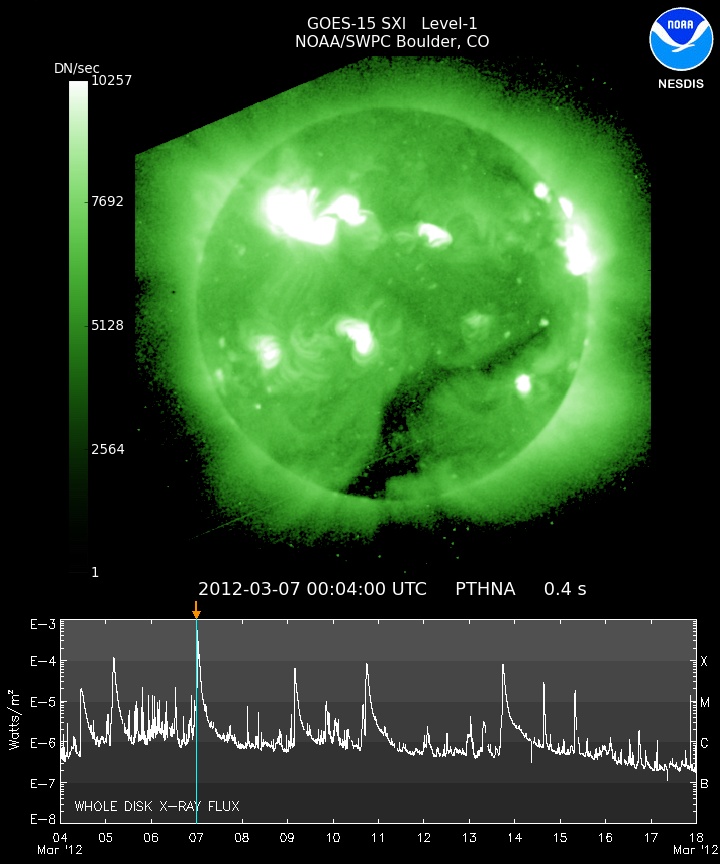