The marine debris data included in this dataset are from annual shoreline surveys conducted from 2013 to 2016 at the islands of Midway Atoll (Eastern, Spit, and Sand Islands) in the Northwestern Hawaiian Islands (NWHI) by the NOAA Pacific Islands Fisheries Science Center (PIFSC), Ecosystem Sciences Division (ESD) with funding from Papahanaumokuakea Marine National Monument (PMNM), and NOAA's Marine Debris (MDP) and Damage Assessment Remediation and Restoration (DARRP) Programs. Prior to the surveys in 2013, each shoreline was divided into fixed 300-meter segments and stratified by the cardinal direction the shoreline was facing (e.g., north, south, east, and west). The shorelines of Eastern, Spit, and Sand Islands were divided into 19, 4, and 23 segments, respectively. All segments were surveyed at all islands during the 2013, 2015, and 2016 missions. During the 2014 mission, limited time was available to survey all segments; therefore, the pre-existing segments were randomized, and a subset of the segments were identified as a first- or second-tier priority for each strata. All first- and second-tier priority segments were surveyed in 2014. During a shoreline survey, field staff flagged the corners of the site and swept the entire survey area for marine debris. Most items found within the survey area >10 cm were collected and, if possible, bagged. Due to operational concerns, metal, glass, and building material were not surveyed or removed. Debris items <10 cm were also collected and bagged if the item could be identified (e.g., bottle caps and lighters were included in the survey, unidentified fragments 1 m) or notable, a GPS waypoint was taken to mark the specific location of the debris, and the item was measured (length and width), recorded on the datasheet, and either bagged, removed, or tagged if the item was too large or hazardous to remove. The survey concluded by walking the perimeter of the survey site with a GPS. Following the survey, bagged and large debris were transported to the operations center for the mission, weighed, and sorted, tallied, and recorded by debris type for each survey. Total weight of all collected debris and the survey area (derived from the GPS tracks) were recorded for each 300-m segment, along with the date since the last debris survey to calculate the accumulation rate. During an extended field season at Midway Atoll in the NWHI in 2012, PIFSC scientists removed all of the marine debris along the shorelines of the islands at Midway Atoll. This represented a "clean slate" and starting point to begin studying the accumulation rate along the shorelines for subsequent years. Accumulation rates are reliable only for Eastern and Spit Islands. The shorelines of Sand Island are cleaned regularly by permanent U.S. Fish and Wildlife Service residents; thus, the debris data recorded by ESD for Sand Island does not represent natural accumulation. The shoreline survey and removal efforts at Midway Atoll have been conducted as a component of ship-based missions to the NWHI, a component of a larger shore-based missions at Midway Atoll, or as a stand-alone shoreline debris removal mission at Midway Atoll. 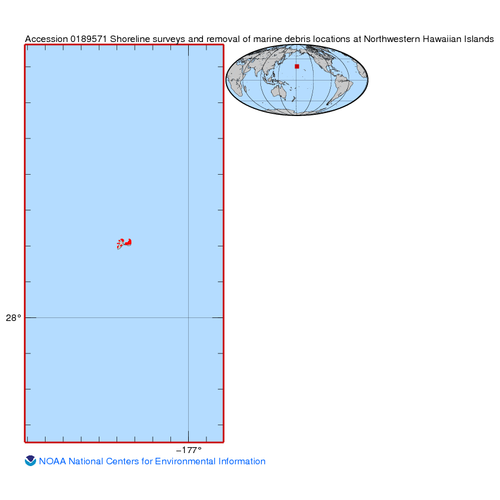