This NOAA Climate Data Record (CDR) is a record for the Northern Hemisphere (NH) Snow Cover Extent (SCE) spanning from October 4, 1966 to present, updated monthly after the 10th of each month. Data prior to June 1999 in the NH SCE CDR are based on satellite-derived maps of NH SCE produced weekly by trained NOAA meteorologists. In June 1999 weekly NOAA NH SCE maps ceased production, and were replaced by daily SCE output from the Interactive Multisensor Snow and Ice Mapping System (IMS). The weekly SCE maps are digitized to an 88x88 (cells) Cartesian grid laid over a NH polar stereographic projection. Each grid cell in the NH SCE CDR has a binary value, indicating snow covered or snow free. The NH SCE CDR has been used in international assessments of climate variability and change, and in investigations regarding the role of snow cover in the climate system. Mapping accuracy is such that this product is considered suitable for continental-scale climate studies. The data are updated monthly in netCDF file format with variables including SCE and National Meteorological Center (NMC) grid (88x88 cell) coordinates. 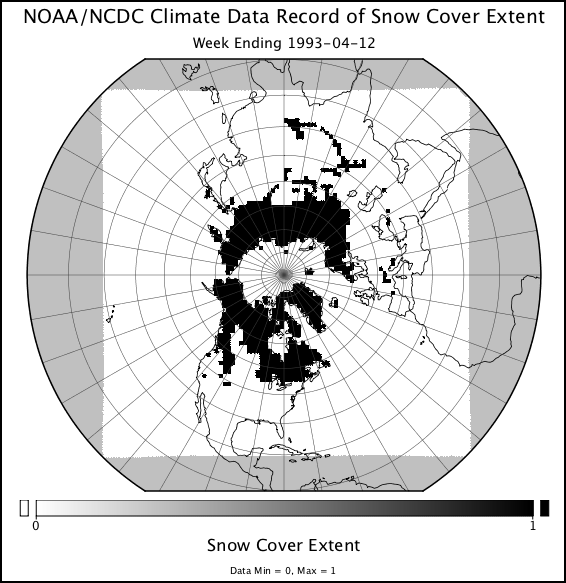