The USGS Central Region Energy Team assesses oil and gas resources of the United States. The onshore and State water areas of the United States comprise 71 provinces. Within these provinces, Total Petroleum Systems are defined and Assessment Units are defined and assessed. Each of these provinces is defined geologically, and most province boundaries are defined by major geologic changes. The Sacramento Basin Province is located in the Northern Central Valley, California, encompassing all or parts of Shasta, Tehana, Glenn, Butte, Colusa, Lake, Yuba, Sutter, Placer, Yolo, Napa, Sacramento, Amador, San Joaquin, Solano, Contra Costa, Calaveras, Alameda, and Stanislaus counties in California. The main population centers within the study area are Sacramento, Stockton, Modesto, Elk Grove, Yuba City, Chico, and Red Bluff, California. The main highways, I-5 and I-80, generally traverse the area from north to south and east to west respectively. The Sacramento River and its tributaries drain the area. For this study the Sacramento Basin Province includes the Northern Central Valley. The province boundary was drawn to include the geologic structures generally considered to be in or bounding the Sacramento Basin. 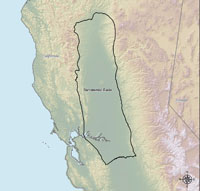