Huricane Satellite (HURSAT)-Advanced Very High Resolution Radiometer (AVHRR) is used to extend the HURSAT data set such that appling the Objective Dvorak technique (ODT) would be possible. AVHRR Global Area Coverage (GAC) data have a spatial resolution of 4km, which corresponds to the intended spatial resolution of the objective Dvorak technique. GAC digital image data is available in mapped mosaics, orbital swaths and brightness composties. The AVHRR is a 4/5 channel radiometer with spectral bands in the visible, near infrared, and thermal infrared. The AVHRR has remained a relatively stable instrument (i.e., similar sensor channels on each satellite) in polar orbit and provides at least twice daily observations of the entire globe from 1979 to present. The satellite data were gridded with grid centers fixed on the tropical cyclone center of circulation. Data include hurricanes from all tropical cyclone-prone basins in the world. Data are provided in a convenient NetCDF format which is self-documenting and follows standard storage and metadata conventions Version 5 supersedes all other versions. 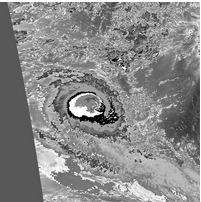