The U.S. Navy periodically uses a Temporary Maritime Activities Area (TMAA) in the central Gulf of Alaska (GoA), east of Kodiak Island. Current scientific data on affected biological and environmental resources are necessary to conduct analyses required for Navy training, exercise, and technology-acquisition activities. In the summer of 2013, the Navy funded a vessel-based survey (Gulf of Alaska Line-Transit Survey (GOALS)) to fill in the gaps of knowledge on distribution, movements, and densities of marine mammals within this training area. The Marine Mammal Laboratory conducted passive acoustic monitoring during this survey cruise. Directional Frequency Analysis and Recording (DiFAR) sonobuoys were deployed approximately every 2 to 3 hours to obtain an evenly sampled census of marine mammal vocalizations; a total of 186 sonobuoys were deployed. Sonobuoys were analyzed in real time for presence/absence of calls from cetaceans; calls were detected on 80 percent of the sonobuoys, including the study area and transit to Kodiak, Alaska. There were seven confirmed species detected: blue, fin, humpback, killer, sei, North Pacific right, and sperm whales, and additional call detections that could not be classified to species. All sonobuoys were provided by the United States Navy (Naval Operational Logistics Support Center, Naval Surface Warfare Center, Crane Division, and the Office of the Assistant Secretary of the Navy). 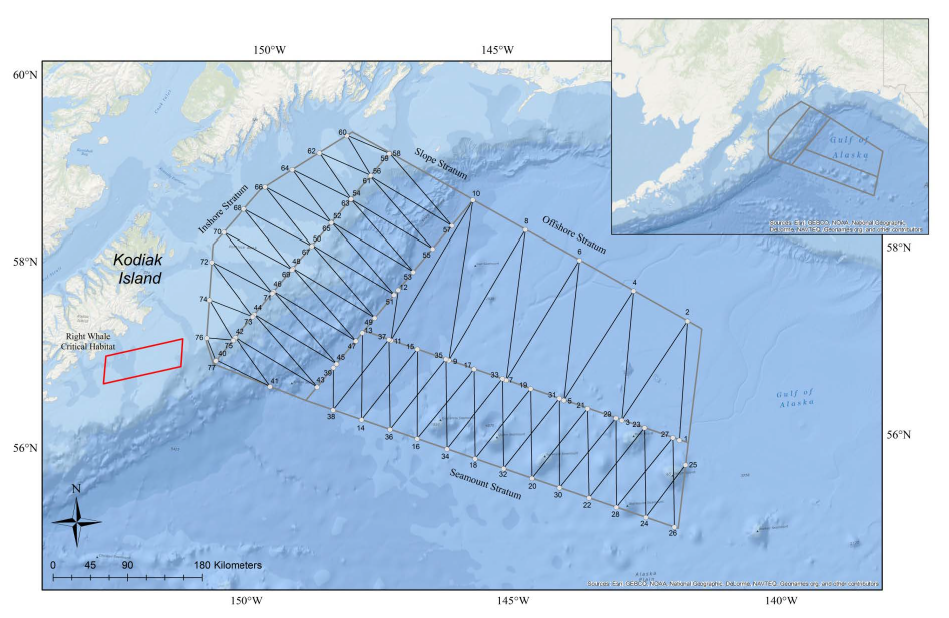