This dataset contains sea surface temperature derived from observations made by the WindSat Polarimetric Radiometer developed by the Naval Research Laboratory (NRL) and launched on 6 January 2003 aboard the Department of Defense Coriolis satellite. This radiometer is well-calibrated and contains the lower frequency channels required for SST retrievals. The radiometer operates in 5 discrete bands: 6.8, 10.7, 18.7, 23.8 and 37.0 GHz. The 10.7, 18.7 and 37.0 GHz bands are fully polarimetric whereas the 6.8 and 23.8 GHz bands have only dual polarization. The feedhorns of each frequency band trace out different arcs along the bench, therefore the Earth Incidence Angles (EIA) are different for each frequency band. Unlike previous radiometers, the WindSat sensor takes observations during both the forward and aft looking scans. This makes the WindSat geometry of the earth view swath quite different and significantly more complicated than the other passive microwave sensors. The Remote Sensing Systems (RSS, or REMSS) WindSat dataset is the only one available that uses both the fore and aft look directions which results in a wider swath and more complicated swath geometry visible in the provided maps. RSS produces these SST data for the Group for High Resolution Sea Surface Temperature (GHRSST) Project. In the data processing chain, a first stage produces a near-real-time (NRT) dataset (identified with a "rt" within the file name) which is made as available as soon as possible. A later second stage produces a final dataset (identified by "v7" within the file name) that contains more data than the NRT version. In this dataset, both ascending (evening time) and descending (morning time) gridded orbital passes are packaged into the same daily file.Although the product designation is "L2P_GRIDDED" it is in actuality a Level 3 Collated (L3C) product as defined in the GHRSST Data Processing Specification (GDS) version 2.0. Its "L2P_GRIDDED" name derives from a deprecated specification in the early Pilot Project phase of GHRSST (pre 2008) and has remained for file naming continuity. 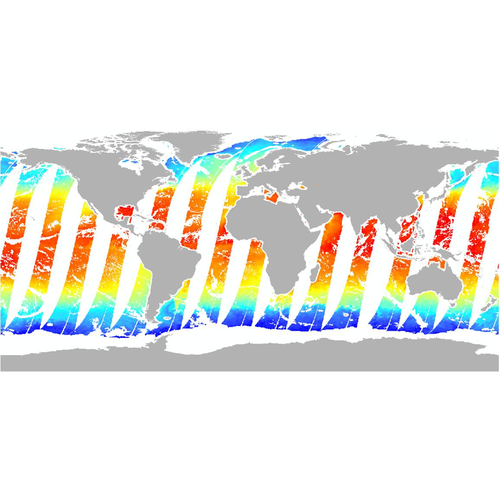