Current direction and bathythermograph (xbt) data were collected using moored current meter casts and other instruments in the Gulf of Mexico, Northwest Atlantic Ocean, and North American Coastline-South from January 23, 1985 to January 31, 1987. Data were submitted by Science Applications, INC - Raleigh NC as part of the North Carolina Frontal Eddy Dynamics Experiment (FRED) project. Data has been been processed by NODC to the NODC standard F015- Current Meter Data and C116- Bathythermograph XBT formats. Full format and format code descriptions are available at http://www.nodc.noaa.gov/General/NODC-datafmts.html.

The F015 format is used for time series measurements of ocean currents. These data are obtained from current meter moorings and represent Eulerian method of current measurement, i.e., the meters are deployed at a fixed point and measure flow past a sensor. Position, bottom depth, sensor depth, and meter characteristics are reported for each station. The data record comprises values of east-west (u) and north-south (v) current vector components at specified date and time. Current direction is defined as the direction toward which the water is flowing with positive directions east and north and negative directions west and south. Data values may be subject to averaging or filtering and are typically reported at 10-15 minute time intervals. Water temperature, pressure, and conductivity or salinity may also be reported. A text record is available for optional comments.

The C116 format contains temperature-depth profile data obtained using expendable bathythermograph (XBT) instruments. Cruise information, position, date and time were reported for each observation. The data record was comprised of pairs of temperature-depth values. Unlike the MBT Data File, in which temperature values were recorded at uniform 5 m intervals, the XBT data files contained temperature values at non-uniform depths. These depths were recorded at the minimum number of points ("inflection points") required to accurately define the temperature curve. Standard XBTs can obtain profiles to depths of either 450 or 760 m. With special instruments, measurements can be obtained to 1830 m. Prior to July 1994, XBT data were routinely processed to one of these standard types. XBT data are now processed and loaded directly in to the NODC Ocean Profile Data Base (OPDB). Historic data from these two data types were loaded into the OPDB. 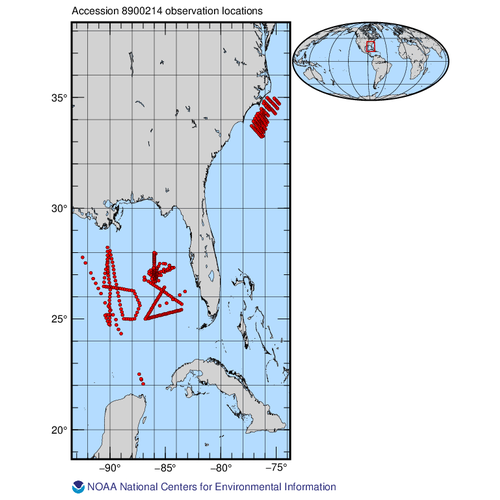