BASE Temperature Data Record (TDR) from the SSM/I and SSMIS Sensors, CSU Version 1

The BASE Temperature Data Record (TDR) dataset from Colorado State University (CSU) is a collection of the raw unprocessed antenna temperature data that has been written into single orbit granules and reformatted into netCDF-4. The temperature data are from the Special Sensor Microwave Imager (SSM/I) and Special Sensor Microwave Imager Sounder (SSMIS) series of passive microwave radiometers carried onboard the Defense Meteorological Satellite Program (DMSP) satellites. This dataset encompasses data from a total of nine satellites including the SSM/I sensors on board DMSP satellites F08, F10, F11, F13, F14, and F15 as well as the SSMIS sensors on board DMSP satellites F16, F17, and F18. The data record covers the time period from July 1987 through the present with a 7 to 10 day latency. The spatial and temporal resolutions of the BASE files correspond to the original resolution of the raw source TDR observations. There are roughly 15 orbits per day with a swath width of approximately 1400 km resulting in nearly global daily coverage. The spatial resolution of the data is a function of the sensor/channel and varies from approximately ~50 km for the lowest frequency channels to ~15km for the high-frequency channels. These files contain all of the information from the original source TDR files with the following changes/additions. The BASE files have been reorganized into single orbit granules with duplicate scans removed, and spacecraft position and velocity based on the TLE (two line element) data have been added for calculating geolocation. With the exception of duplicate scans, none of data from the original TDR files was changed or removed. This BASE TDR dataset is used by CSU as input for the subsequent processing of the final intercalibrated Fundamental Climate Data Record (FCDR). The file format is netCDF-4 with added metadata that follow the Climate and Forecast (CF) Conventions and Attribute Convention for Dataset Discovery (ACDD). 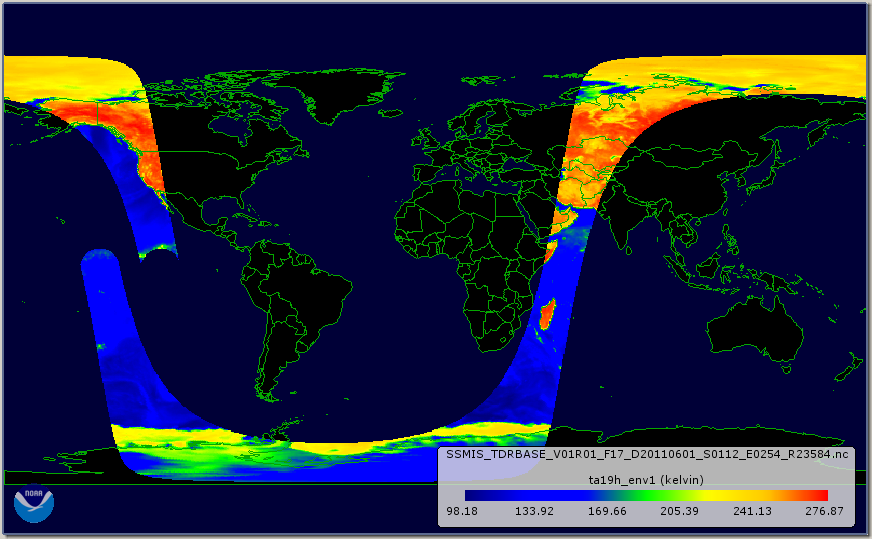