This series consists of volumes entitled 'Meteorological Journal' (a regulation Navy-issue publication) which were to be completed by masters of merchant vessels during their voyages. Period of record 1878-1894, peak 1885-1886. Continuing the pioneering work undertaken by Lt. Matthew Fontaine Maury, United States Navy, the U.S. Navy's Hydrographic Office endeavored to enlist the help of commercial vessels in compiling data regarding meteorological conditions at sea. These meteorological journals were completed by the captains of over 650 merchant vessels transiting the Atlantic, Indian, and Pacific Oceans. Although the majority of the vessels represented in the journals were American, vessels from Great Britain, Germany, Austria, France, Canada, Italy, and other nations are included. Each journal documents the passages of one vessel, usually for a two-month period of time. Entries were made daily, noting particulars of the weather during the day. Also noted are the course and speed of the vessel, measured at two-hour intervals, along with the distance traveled. The TIF images created from microfilm by contractors with NOAA's Climate Database Modernization Program (CDMP). Original bound volumes reside in Record Group 27 at the National Archives at College Park, MD, including 31 Journals that were inadvertently misfiled at NARA among the US Maury Collection, and which have not yet been microfilmed or digitized. It is estimated these journals would add ~28,000 observations from 1879-1890. 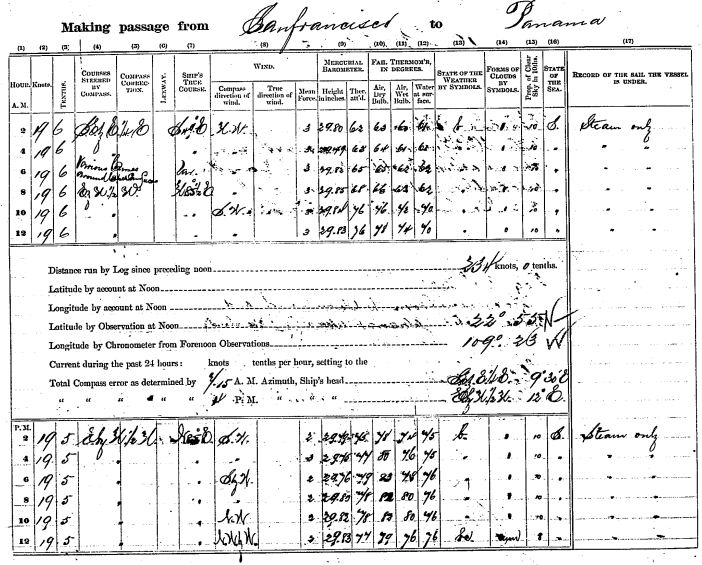