Temperature, salinity profiles and associated data collected in the Southern Oceans in support of the Global Ocean Ecosystem Dynamics project, 2001-04 to 2001-08 (NCEI Accession 0001097)

The overall goal of the U.S. Southern Ocean GLOBEC program is to elucidate circulation processes and their effect on sea ice formation and Antarctic krill (Euphausia superba) distribution and to examine the factors that govern Antarctic krill survivorship and availability to higher trophic levels, including penguins, seals, and whales. Consequently, a primary objective of this second U.S. SO GLOBEC broad-scale survey cruise (NBP01 04) is to provide a description of the water mass distribution and circulation on the west Antarctic Peninsula (WAP) continental shelf in the region of Marguerite Bay. Historical hydrographic data for this region are limited, particularly during times other than austral summer. However, these data show that the water masses in the area consist of Antarctic Surface Water (AASW) in the upper 100 m to 120 m, a cold Winter Water layer at 80 m to 120 m, and a modified form of Upper Circumpolar Deep Water (UCDW) that covers the shelf below the permanent pycnocline at 150 m to 200 m. The UCDW, which is the source for the modified water on the WAP shelf, is found at the outer edge of the continental shelf at depths of 200 to 600 m. Thus, the first objective of the hydrography component is to fully describe the water mass distribution on the WAP continental shelf. This objective also includes showing how the water structure changes from the first regional survey, which was only two months ago. Circulation in the study region, which has been inferred from the limited hydrographic observations, suggests a clockwise gyre on the continental shelf near Marguerite Bay, upwelling of UCDW at specific sites in the study region, and across shelf flow of UCDW into Marguerite Bay at depth. However, the details of the circulation and the spatial and temporal variability of the flow remain to be determined. Thus, the second objective of the hydrography component is to provide a description of the large scale circulation for the portion of the WAP continental shelf included in the study region. The resulting circulation distribution can then be compared with drifter, moored current, and shipboard ADCP measurements as well as circulation derived from theoretical models. 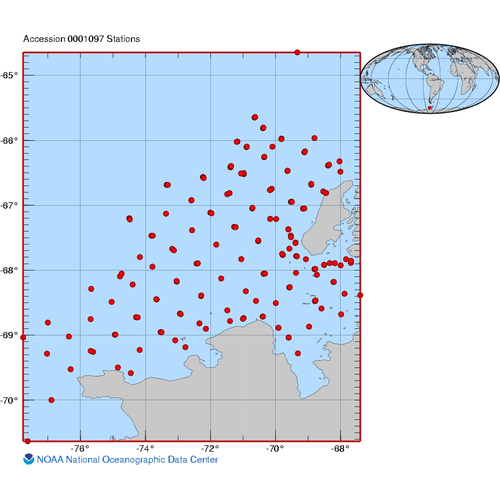