This digital dataset contains the percentage of coarse-grained deposits in wells in 15 meter increments and the percentage of coarse-grained deposits in texture model lattice points interpolated from the well data for the Central Valley. The texture model was used as input data for the hydraulic properties portion of the Central Valley Hydrologic Model (CVHM). The Central Valley encompasses an approximate 50,000 square-kilometer region of California. The complex hydrologic system of the Central Valley is simulated using the U.S. Geological Survey (USGS) numerical modeling code MODFLOW-FMP (Schmid and others, 2006). This simulation is referred to here as the CVHM (Faunt, 2009). Utilizing MODFLOW-FMP, the CVHM simulates groundwater and surface-water flow, irrigated agriculture, land subsidence, and other key processes in the Central Valley on a monthly basis from 1961-2003. The total active modeled area is 20,334 square-miles on a finite-difference grid comprising 441 rows and 98 columns. Slightly less than 50 percent of the cells are active. The CVHM model grid has a uniform horizontal discretization of 1x1 square mile and is oriented parallel to the valley axis, 34 degrees west of north (Faunt, 2009). In order to better characterize the aquifer-system deposits, lithologic data from approximately 8,500 well-drillers logs of boreholes ranging in depth from 12 to 3,000 feet below land surface were compiled and analyzed. The percentage of coarse-grained sediment, or texture, then was computed from this classification for each 50-foot depth interval of the driller's logs. A 3D texture model was developed by interpolating the percentage of coarse-grained deposits onto a 1-mile spatial grid at 50-foot depth intervals from land surface to 2,800 feet below land surface. The CVHM is the most recent regional-scale model of the Central Valley developed by the USGS. The CVHM was developed as part of the USGS Groundwater Resources Program (see "Foreword", Chapter A, page iii, for details). 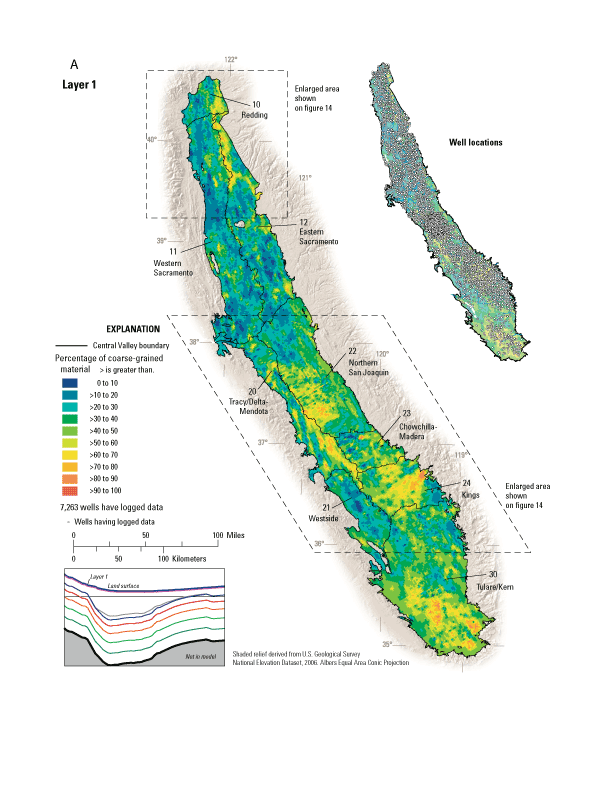