Partial pressure (or fugacity) of carbon dioxide, salinity and other variables collected from Surface underway observations using Carbon dioxide (CO2) gas analyzer, Shower head chamber equilibrator for autonomous carbon dioxide (CO2) measurement and other instruments from NATHANIEL B. PALMER in the Indian Ocean, South Atlantic Ocean and others from 2015-01-04 to 2015-10-18 (NCEI Accession 0157344)

These data were collected by Taro Takahashi and Stewart Sutherland of Columbia University; Lamont-Doherty Earth Observatory and Colm Sweeney of University of Colorado at Boulder; Cooperative Institute for Research In Environmental Sciences as part of the VOS_Nathaniel_Palmer_Lines_2015 data set. CDIAC associated the following cruise ID(s) with this data set: 320620150104 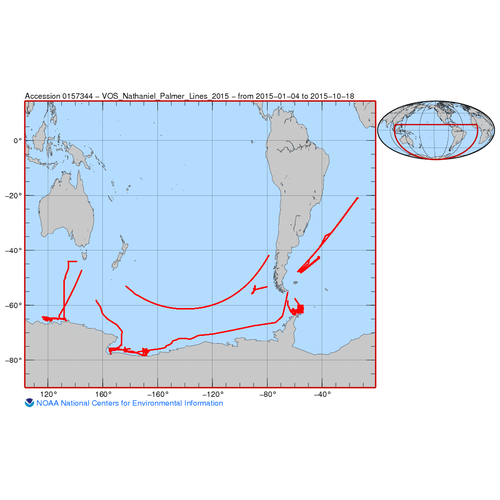