Partial pressure (or fugacity) of carbon dioxide, dissolved inorganic carbon, temperature, salinity and other variables collected from discrete sample and profile observations using CTD, bottle and other instruments from the DISCOVERY in the North Atlantic Ocean from 1990-05-15 to 1990-06-04 (NCEI Accession 0113534)

NODC Accession 0113534 includes chemical, discrete sample, physical and profile data collected from DISCOVERY in the North Atlantic Ocean from 1990-05-15 to 1990-06-04 and retrieved during cruise CARINA/74DI19900515. These data include DISSOLVED INORGANIC CARBON, HYDROSTATIC PRESSURE, NITRATE, NITRITE, PHOSPHATE, Partial pressure (or fugacity) of carbon dioxide, Potential temperature (theta), SALINITY, SILICATE and WATER TEMPERATURE. The instruments used to collect these data include CTD and bottle. These data were collected by Andrew Watson of Plymouth Marine Laboratory as part of the CARINA/74DI19900515 data set. 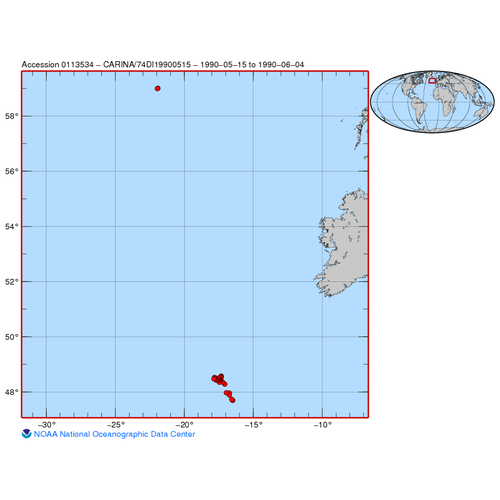