The Castle Point Buoy Station is moored near the western shore of the Hudson River off the Stevens Institute campus in Hoboken, NJ. It is moored in approximately 30â of water and is 350â from the shoreline. The buoy is approximately 4â in diameter and 7â high from water level. A two point mooring consisting of 4 pyramid anchors are utilized to prevent excess drift and spin. The sensor package on the buoy during period (1) consisted of a YSI 6600EDS sonde (temperature, salinity at ~1 m depth) and RM Young meteorological sensors (wind speed and direction, air temperature, relative humidity and solar radiation) as well as a Vaisala pressure gauge (barometric pressure). Dew point was calculated from measured parameters. The sensor package during period (2) includes only a YSI 6600 sonde (temperature, salinity, acidity, turbidity and dissolved oxygen). A bottom YSI sonde was added on a nearby pier in summer 2016 (see data and metadata for Castle Point Pier Station). 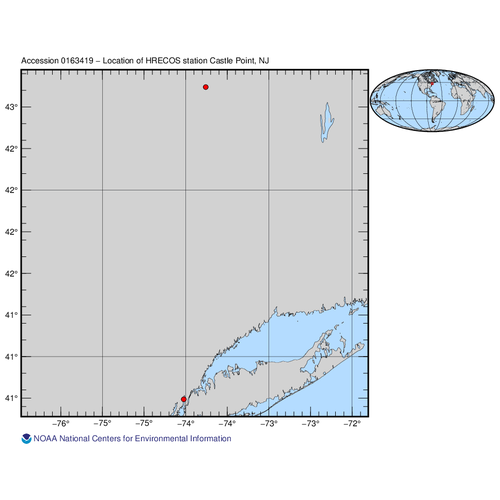