The hydrologic site for Schodack Island is immediately south of the Schodack Island State Park boat launch and the instrument housing is fixed to the steel bulkhead. Sensors on a YSI 6600V2 report Acidity, Dissolved Oxygen (% saturation and mg/L), Specific Conductance, Turbidity, Water Temperature, Water Level. The meteorological instrumentation is on a small island just west of Schodack Island State Park and just south of the I-90 by-pass bridge. All sensors are attached to the tower holding the navigation aids (marker # 197), with the exception of the barometer, which is onshore as part of the Schodack Island Hydrologic Station. The island is at least 130 m from either shore so there is no interference from nearby vegetation or ridgelines. Meteorological sensors report the following parameters every 15 minutes: air temperature, barometric pressure, radiation (PAR), precipitation, relative humidity, wind speed, direction & gusts. 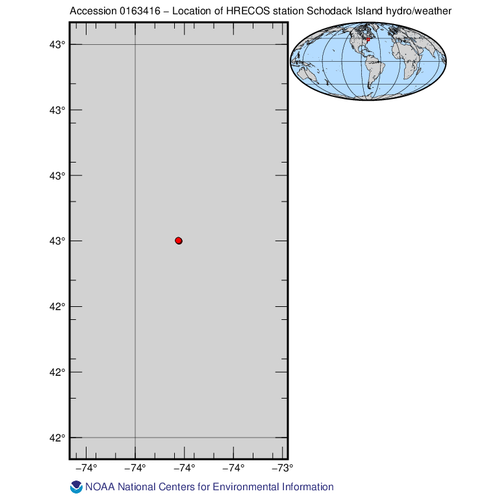