Ocean Station Vessels (OSV) or Weather Ships captured atmospheric conditions while being stationed continuously in a single location. While While most of the collection Navy vessels would go to a specified coordinate, stay for variable lengths of time, and record weather and meteorological observations. The collection begins in 1940, at the onset of WWII, when meteorological observations in the Atlantic Ocean were critical for military strategy in the Eastern theatre. While the vast majority of the collection derives from United States Navy and Coast Guard vessels, Ocean Station Vessels were considered an international cooperation, and there are a few non-United States ships included as well. Beginning in the 1960s, satellites and buoys capturing climatological data began to replace Ocean Station Vessels, almost completely phasing out the use of these ships by the mid-1970s. The collection includes a significant quantity of upper air observations on microfilm as well as paper transmittances describing instrument statistics, abnormalities, and basic reporting. 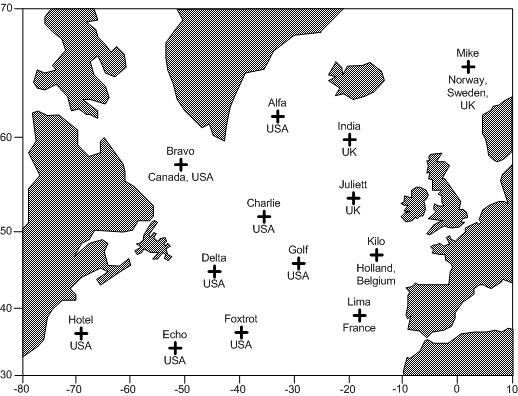