This data set, 5 of 5 archived at the NODC, contains digital orthophotography. The data set presents information that represented conditions for the specified Digital Orthophoto Quarter Quads (DOQQ) regions of interest as specified by PhotoScience Task No. 01012C0053 for coastal areas of South Carolina. The project area was selected specifically to cover those sections of the South Carolina coastal critical zone where oysters had historically been mapped by SC Department of Natural Resources, Marine Division. Additional data from this collection is archived at the NODC under accession numbers 0084621, 0084749, 0084750, 0084751.

The extent of the DOQQs for the project area ranges from the Hilton Head area in the southern part of South Carolina to the Myrtle Beach area in the northern part of the state. The digital orthophotos in this series have a theoretical ground resolution of 0.25 meter. The digital orthophotos are 4-band in nature (red, green, blue, near infrared) and are delivered as flown in four-band .img file format with associated .png, .jpg, and indexing files. The four-band imagery is delivered in mosaics equaling one eighth of a DOQ. All data were captured during specific imaging windows per contract. The total DOQQ area is approximately 1,527 square miles. 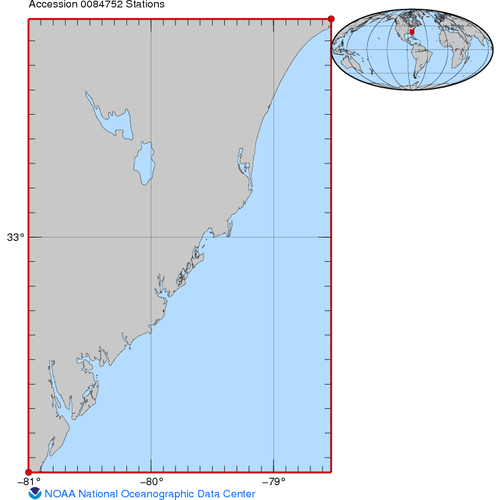