The NOAA Geostationary Operational Environmental Satellite (GOES) series provides continuous measurements of the atmosphere and surface over the Western Hemisphere. The GOES satellites circle the Earth in a geosynchronous orbit, which means they orbit the equatorial plane of the Earth at a speed matching the Earth's rotation. This orbit allows them to hover continuously over one position on the surface of the Earth. The geosynchronous plane is about 35,800 km (22,300 miles) above the Earth, high enough to allow the satellites a full-disc view of the Earth. The GOES-East satellite is positioned over the equator at 75 degrees West longitude, and the GOES-West satellite is positioned at 135 degrees West longitude. The GOES Imager is a five-channel (one visible, four infrared) imaging radiometer designed to sense radiant and solar reflected energy from sampled areas of the earth. GOES data are used by researchers for understanding interactions between land, ocean, atmosphere, and climate. GOES Variable (GVAR) format is the data transmission format used to broadcast environmental data measured by the independent GOES Imager and Sounder instruments, beginning with GOES-8 launched in 1994. Data distribution formats available to users are raw, AREA, NetCDF, GIF, and JPEG. 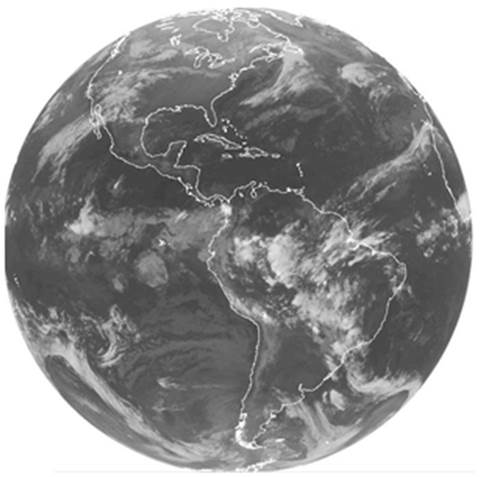