The High-Resolution Infrared Radiation Sounder (HIRS) of intersatellite calibrated channel 12 brightness temperature (TB) product is a gridded global monthly time series product spanning from 1979 to the most current full year, updated monthly. Among the twenty channels in the HIRS instrument, channel 12 measures upper tropospheric water vapor (UTWV). Multiple polar orbiting satellites in the NOAA Polar-orbiting Operational Environmental Satellite (POES) series and MetOp-A have carried HIRS instruments. Due to the independence in calibration of the individual HIRS instruments, biases exist between satellites. Examination of the intersatellite biases shows that the biases are scene brightness temperature dependent. These HIRS channel 12 measurements from the NOAA POES and MetOp-A are calibrated to a baseline satellite based on intersatellite bias correction data. The differences from the last version include that the dataset is now provided as monthly mean 2.5x2.5 degree latitude/longitude in netcdf format. This CDR is key to understanding water vapor feedback climatology and has been used to study long-term water vapor variability, to evaluate climate models, and to study large-scale atmospheric circulations. 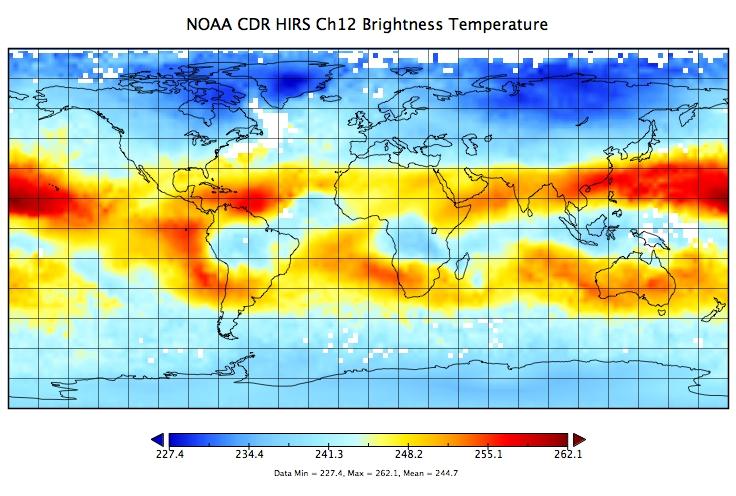