The Regional Ocean Forecast System (ROFS) was developed jointly by the Ocean Modeling Branch of the National Weather Service's Environmental Modeling Center, the National Ocean Service's Coast Survey Development Lab, Princeton University, and Naval Oceanographic Office (NAVOCEANO). ROFS is based on a hydrodynamic, three-dimensional ocean circulation model (Princeton Ocean Model) which simulates temperature, salinity, surface elevation, and currents for a region off the U.S. East Coast from ~30 to 47N and out to 50W. The model is driven at the ocean surface boundary by heat, moisture, and momentum fluxes provided by NCEP's Eta mesoscale atmospheric forecast model. The ocean model is driven along its open (that is, southern and eastern) boundaries by climatological estimates of temperature, salinity, and transport. The spatial resolution of the model varies from approximately 20km offshore to about 10km nearshore. The coastal boundary corresponds to the location of the 10m isobath. In the vertical, an 18-layer sigma (terrain-following) coordinate system is used with at least half the layers concentrated in the upper 100m. Tidal forcing is included in the model.

The forecast cycle generates regional ocean forecasts out to 48 hours. Surface forcing is obtained from the 3-hourly surface fields from NCEP's Eta mesoscale atmospheric prediction model. [This abstract was obtained from the ROFS website at http://polar.wwb.noaa.gov/cofs/Description.html#OM on June 23, 2004.] 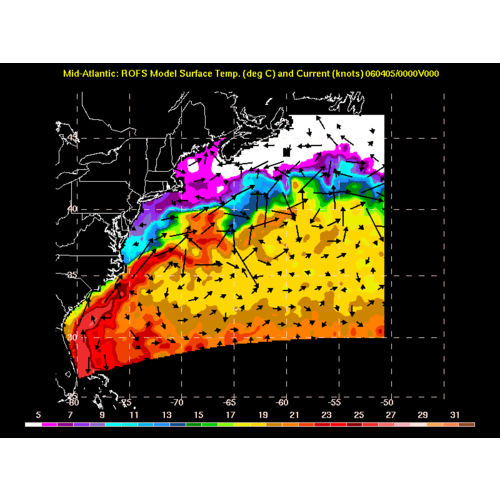