This data set contains 5-minute land use maps for agricultural activity in Amazonia. The data set was produced by the statistical fusion of agricultural census data from Brazil,Columbia, Bolivia, and Peru with the land cover data product from the Global Land Cover Facility. These land use maps indicate the estimated total amount of cropland and pasture (natural and planted) for the Amazon and Tocantins River basins in 1995 and 1980 and are suitable for use in models or other similar purposes. Data are provided in the netCDF format and the ARC/INFO GRID ASCII format.The 1995 data were generated from a fusion of agricultural census data and a satellite classification, and are described in Cardille, Foley, and Costa (2002). The fusion technique merges agricultural census data from Brazil, Columbia, Peru, and Bolivia with land cover data from the University of Maryland Global Land Cover Facility 1-km classification. This technique was used to derive an estimate of the mid-1990s total agriculture surface for the region, which was then apportioned according to agriculture census data into cultivated area, natural pasture, and planted pasture.The 1980 maps, including only the Brazilian portion of the Amazon/Tocantins river drainage basins, were created by scaling the mid-1990s snapshots backward in time using the relative increase or decrease in agriculture, as derived from mid-1980s census data and United Nations Food and Agriculture Organization (FAO) data (Cardille and Foley, 2003). 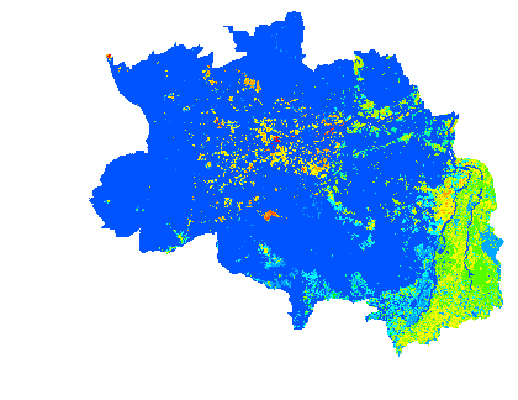