Twenty-five (25) prototype satellite-tracked ice trackers manufactured by PacificGyre Inc. were deployed on the sea ice along the Alaskan Arctic coast. Twenty were deployed in the spring of 2015 in clusters of five on first year and multi-year ice north of Barrow, AK, on landfast ice near Barrow, and in Harrison Bay in the Beaufort Sea. Five more were deployed in March 2017 within Elson Lagoon NE of Barrow. Trackers were transported via helicopter or snow machine to the deployment locations; trackers #7, #8, and #9 were dropped from the helicopter while in flight to test their ruggedness, and fell 30, 25, and 40 ft respectively.

The IceTrackers were tracked from their release until they beached on-shore or died at sea because of battery failure or other causes. Tracker positions were determined via GPS, and positions were relayed via Iridium communications to PacificGyre's on-shore data center. Sampling rates in 2015 varied from 10 min to 2 hours. In 2017, drifters transmitted every 10 minutes from 3/1/2017 12:00 to 3/2/2017 5:00, and every 12 hours thereafter. The trackers were designed to float, and deployments continued after the ice melted. Many trackers remained active as sea ice re-formed in the region, and several trackers were frozen in the ice and released the following spring. Tracker #3 survived more than 2 years, transmitting positions from 4/16/2015 - 5/24/2017. 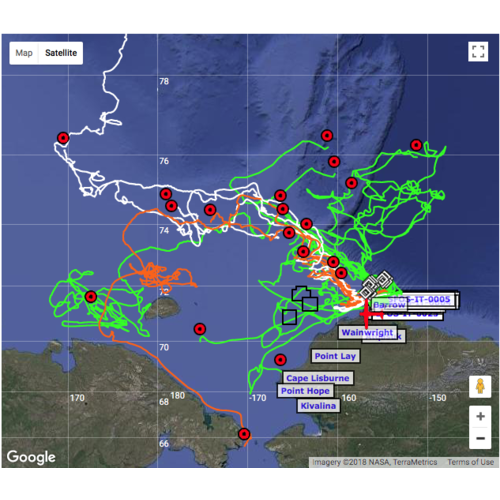