Approximately 14.2 million measurements of surface water pCO2 made over the global oceans during 1957-2019 have been processed to make a uniform data file in this Version 2019. Measurements made in open oceans as well as in coastal waters are included. The data assembled include only those measured using equilibrator-CO2 analyzer systems, and have been quality-controlled based upon the stability of the system performance, the reliability of calibrations for CO2 analysis and the internal consistency of data. We have added 567,632 data points comprised of 158 leg/cruise segments in this version. All of these were collected on the 4 ships in our current field program. These 4 ships operate primarily in high latitudes in both hemispheres and have built decades long records in these areas. R/V Nathaniel B. Palmerâs system has been operating since 1995, R/V Laurence M. Gouldâs system since 2001, USCGC Healy since 2011, R/V M. Langseth since 2010 (terminated in 2018), and R/V Sikuliaq since 2015. Our contribution to this database through many years of 3.31 million records is primarily for the polar and sub-polar seas. These underway data have been quality controlled and corrected for the time lag and temperature differences between the water intake and pCO2 measurements. In order to allow re-examination of the data in the future, a number of measured parameters relevant to pCO2 in seawater are listed. The overall uncertainty for the pCO2 values listed is estimated to be Â± 2.5 uatm on the average. The names and institutional affiliations of the contributors are listed in Table 1. The documentations for the previous versions (V1.0, V2007, V2008, V2009, V2010, V2011, V2012, V2013, V2014, V2015, V2016, V2017, and V2018) of our database are available at NCEI via Ocean Carbon data System (OCADS) LDEO Database web page: https://www.nodc.noaa.gov/archive/arc0105/0160492/ The global pCO2 data set is available free of charge as a numeric data package (NDP) from the OCADS: https://www.nodc.noaa.gov/ocads/oceans/LDEO_Underway_Database/. The NDP consists of the oceanographic data files and this printed documentation, which describes the procedures and methods used to obtain the data. 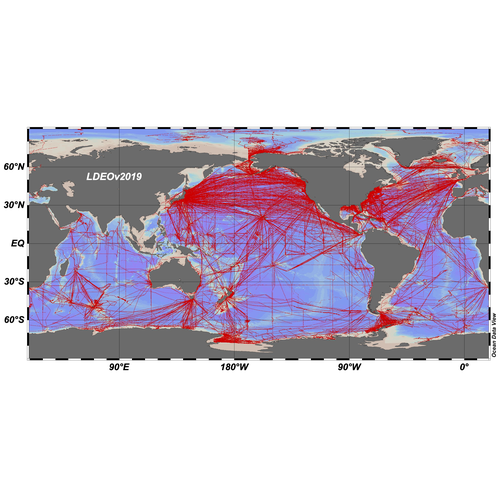