This data set, GLDAS-2.0 1.0 degree 3-hourly (reprocessed in July 2015, in NetCDF format), contains a series of land surface parameters simulated from the Noah Model 3.3, and currently covers from January 1948 to December 2010 but will be extended as the data becomes available.

The model simulation was initialized on January 1, 1948, using soil moisture and other state fields from the LSM climatology for that day of the year. The simulation was forced by the global meteorological forcing data set from Princeton University (Sheffield et al., 2006). The simulation used the common GLDAS data sets for land cover (MCD12Q1: Friedl et al., 2010), land water mask (MOD44W: Carroll et al., 2009), soil texture (Reynolds, 1999), and elevation (GTOPO30). The MODIS based land surface parameters are used in the current GLDAS-2.x products while the AVHRR base parameters were used in GLDAS-1 and previous GLDAS-2 products (prior to October 2012).

The main objective for Version 2 is to create more climatologically consistent data sets using the Princeton forcing data sets extending from 1948. In Version 1, forcing sources switched several times throughout the record from 1979 to present, which introduced unnatural trends and exhibited highly uncertain forcing fields in 1995-1997. Other enhancements made in Version 2 include model version upgrade, switching to MODIS based land surface parameter data sets, and initialization of soil moisture over desert. In the Noah model, the bottom layer temperature data set was also updated. More details regarding the land surface parameter data changes can be found at the GLDAS project website.

The reprocessed GLDAS_NOAH10_3H.2.0 data are in NetCDF format and contain 36 variables. Soil Moisture and Soil Temperature are provided at four vertical layers. For more information, please see the README Document. 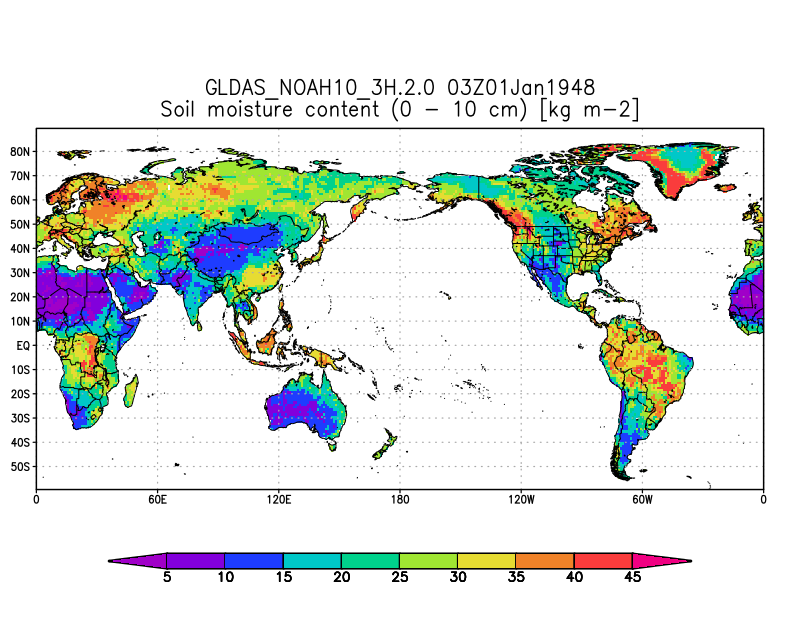