Multiple experiments were conducted to determine the effects hydrogen sulfide had on seedlings and seed germination in the seagrass Zostera marina. One study identified lethal limits of H2S for Z. marina seedlings, as well as identified ranges in which Z. marina seedlings are unaffected by sulfide levels. It was determined that Z. marina seedlingsâ growth rates are stunted by H2S levels. Another study identified if anoxia, salinity, sulfide, time the seeds were picked or location the seeds were picked from affected seed germination rates or acted as germination cues. Germination rates for each treatment at each measurement were calculated by dividing the number of germinated seeds by the number of total seeds in each vial at each timepoint. A third seed study identified the best storage conditions for Z. marina seeds to maximize seed viability and germination rates, as well as identified possible germination cues for Z. marina seeds. Various seed storage conditions included fridge storage vs sea table storage, storage in mud vs sandy sediment vs seawater, light vs dark conditions and anoxic vs oxygenated seawater. The objectives of a fourth experiment were to census the density of Z. marina shoots along a transect in Padilla bay. By manipulating sediment conditions among some of the plots, we measured how organic matter in sediment is converted to sulfide and how that sulfide affects eelgrass shoot density. To do so blocks of agar and 100g of sucrose were prepared and each treatment plot received half of an agar block, placed beneath the sediment, every two weeks. Control plots had the sediment manipulated in the same way but without adding organic matter under the sediment. At each two week interval, pore water was sipped and measured for salinity, pH, and total sulfide content at each plot, the sediment temperature of each plot was taken, and the number of vegetative and flowering shoots at each plot was recorded. 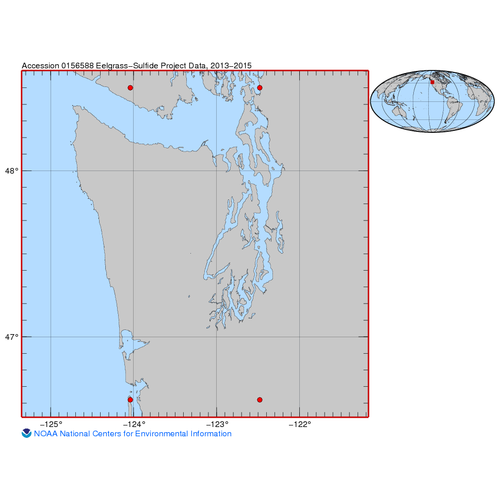