Dissolved inorganic carbon, pH, alkalinity, temperature, salinity and HYDROSTATIC PRESSURE collected from discrete sample and profile observations using CTD, bottle and other instruments from the SEWARD JOHNSON in the North Atlantic Ocean from 2003-04-18 to 2003-05-22 (NCEI Accession 0113596)

NODC Accession 0113596 includes chemical, discrete sample, physical and profile data collected from SEWARD JOHNSON in the North Atlantic Ocean from 2003-04-18 to 2003-05-22 and retrieved during cruise 33SW20030418 and MP-8 Cruise. These data include ALKALINITY, DISSOLVED INORGANIC CARBON, HYDROSTATIC PRESSURE, SALINITY, WATER TEMPERATURE and pH. The instruments used to collect these data include CTD and bottle. These data were collected by Patricia L. Yager of University of Georgia; School of Marine Programs and D. Capone and A. Subramaniam [affiliation unknown] as part of the CARINA/33SW20030418 data set. 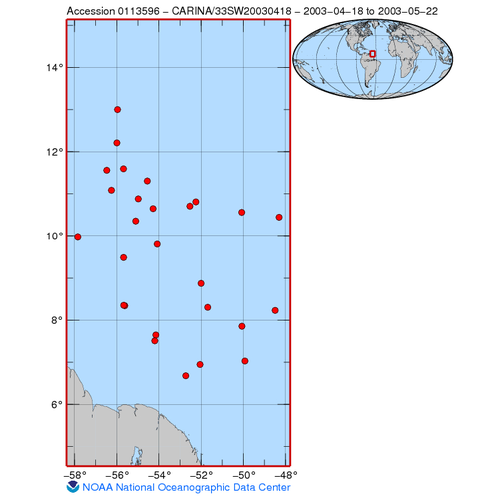