Data collected to determine the relationship between coral reef health, alien algae, and fish biomass at sites on Oahu and the Big Island, Hawaii, during 2004 - 2005 (NCEI Accession 0002619)

Data in this set come from two studies: "Ability of protected reefs to resist alien algae" and "How many fish does it take to keep the alien algae out?" Both are authored by Ms. Danielle Jayewardene and Dr. Charles Birkeland of University of Hawaii Manoa, in 2005 and 2006, respectively. For the former, the goal was to objectively and quantitatively assess the ability of marine protected areas (MPAs), to maintain ecosystem health, and to thereby resist invasion of alien algae. For the latter, specific objectives involved a) determining whether there are differences in cropping ability by larger herbivorous fishes compared to smaller herbivorous fishes, and b) whether there is a threshold level of algal biomass above which even an increased number of herbivorous fishes simply cannot crop down. The field work took place at eight coral reef sites located on the island of Oahu and the island of Hawaii. 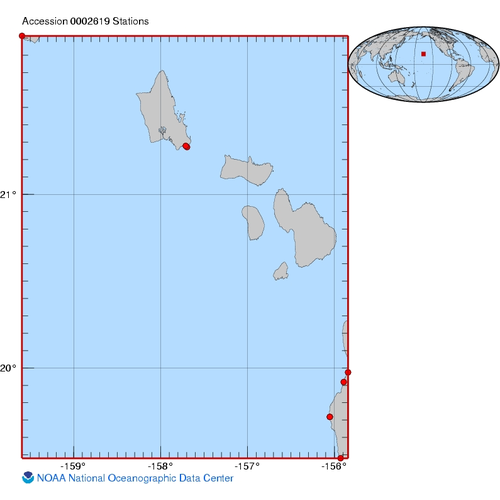