The publication of the Bulletin of International Simultaneous Observations, began July 1, 1875, with daily maps added in 1877. It was published for distribution among cooperative observers only, and continued daily through 1887. Observations were taken simultaneously at 7:35am (later changed to 7am) Washington mean time. The published daily bulletins cover the period from January 1, 1875, to June 30, 1884, while the corresponding daily charts extend from January 1, 1875, to December 31, 1887. On June 30, 1884, the publication of the daily bulletin was discontinued, but the daily map, the monthly summary, and the annual review were continued until their final cessation with December 31, 1887. Beginning July 1, 1884, the size of the published daily international chart was enlarged to four times its former size, and about July, 1885, the published and Annual Review, were enlarged to the same size, i. e., to the size of the manuscript compilation. The international data in these bulletins were carefully worked over into a homogeneous system by rules established before the publication of the first number for 1878, and expressed in both English and metric measures. The daily bulletins appeared regularly just about one year after the dates to which they pertained. The material was primarily intended as a basis for the study of the dynamics of the atmosphere, and not for climatological study. It is a mistake to treat them from the latter point of view; the charts present strictly simultaneous daily conditions over the whole Northern Hemisphere and are based on a larger number of simultaneous observations than those used for the Daily Weather Map of the Northern Hemisphere that began with January 1, 1914. 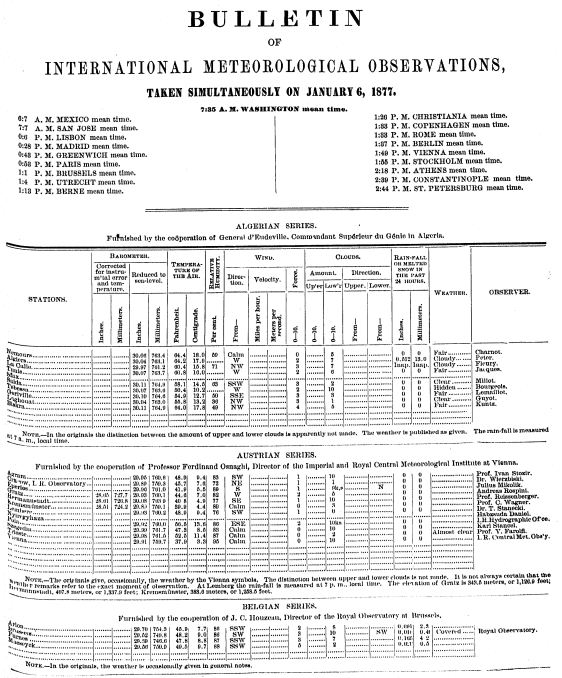