Several bureaus within the Department of Interior compiled available information from seabird observation datasets from the Atlantic Outer Continental Shelf into a single database, with the goal of conducting research and informing coastal and offshore planning activities. The cooperators were the Bureau of Ocean Energy Management's (BOEM) Environmental Studies Program (www.boem.gov/Environmental-Stewardship/Environmental-Studies/Environmental-Studies.aspx), the U.S. Fish and Wildlife Service's (USFWS) Division of Migratory Bird Management (www.fws.gov/migratorybirds/) and the U.S. Geological Survey's (USGS) Patuxent Wildlife Research Center (www.pwrc.usgs.gov). The resulting product is the Atlantic Offshore Seabird Dataset Catalog, which characterizes the survey effort and bird observations that have been collected across space and time. As of December 2013, the database contains over 70 datasets from 1906-2013 with about 300,000 records of seabird observations.

The data archived at NODC is comprised of roughly 50 datasets from 1938-2013 with about 260,000 observation records. This archive is a subset of the main database, excluding datasets from surveys where the scientific design was not specifically designed to sample marine birds (e.g. coastal portions of National Audubon Society's Christmas Bird Counts).

The full archive of scientific data contains information on individual observations as well as survey effort. Each observation record has a unique point location, date and time, species and observation count. There may also be biological information related to the sighting, such as animal age or behavior. The survey effort information (i.e. weather variables) may have been recorded for each individual observation but was more often recorded at the transect (line along which the plane or boat traveled) level. The dataset contains data primarily for seabirds, but some other observations accompanied bird data submissions and were not discarded: marine mammals, turtles, fish, and non-biological sightings such as other boats, fishing gear and trash.

The data archived at the NODC is in .csv format, with an associated file detailing the data structure in .csv format. A detailed metadata record in Federal Geographic Data Committee (FGDC) format and a final report in .pdf format is included with these data. Data use must take into account use constraints (data limitations) listed within the included metadata record, and cite the Atlantic Offshore Seabird Dataset Catalog, USGS, 2013. 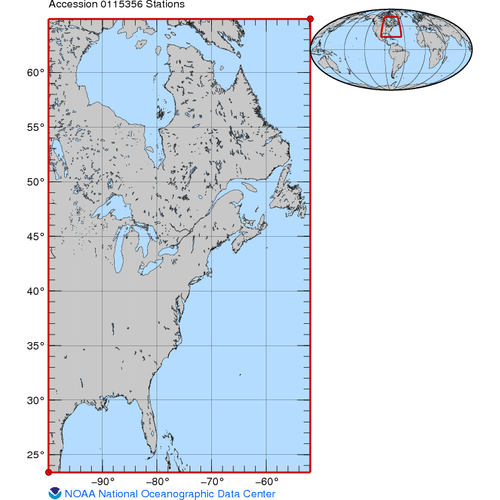